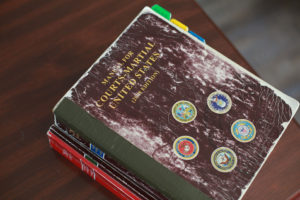 Are you under investigation or facing a Court-Martial at Fort Stewart or Hunter Army Airfield? If so, you have the right to hire your own private attorney to represent you.  A Court-Martial is no small matter because it could ultimately result in a Dishonorable or Bad Conduct Discharge.

Retaining the RIGHT defense attorney matters because it could mean the difference between a promising career and life-altering consequences. While you are entitled to an appointed military defense lawyer, you need an experienced Courts-Martial Defense lawyer who has unencumbered resources and can skillfully and aggressively defend you in a military justice system that can be unkind to those who have devoted their lives to protecting this country.

Attorney Brad Dixon is a former Military Prosecutor and Defense Counsel who has litigated hundreds of cases in the JAG Corps. Attorney Dixon served as 1 of 23 Special Victims Prosecutors, world-wide, and he was the “go-to” litigator when it came to complex sex crime prosecution cases. In addition, he has served as 1 of 5 Expert Criminal Litigator and Training Officers whose sole job was to travel the Army worldwide to train Army prosecutors in every facet of military crimes and misconduct cases. Therefore, he understands what you are up against in the military justice system.

Call (912) 525-0555 today for a FREE Case Evaluation! We are here to defend and protect the constitutional rights that you and so many other military personnel scarified to protect.

Unfortunately, you will not receive the full details of your case until you are actually charged. The timespan between the initial accusation and formal charges is a crucial period of time when evidence should be collected and leads should be investigated in support of your defense.

You have the right to seek advice from a private Military Defense Attorney from the onset of a military crime accusation. You need swift and reliable advice and/or representation for a Court-Martial (Special or General).

The SPCM is the next level of trial by Courts-Martial. Unless you elect to be tried by military judge alone, the hearing will consist of at least four officers serving as a jury; a military prosecutor; and a defense counsel. Offenses in SPCM are often comparable to misdemeanor offenses in civilian courts.

In civilian courts, if all jury members cannot agree on a verdict, the trial can end with a hung jury and the court can declare a mistrial. In the military legal system, there is no such thing as a “hung jury” because it only takes three-fourths of the officers to agree on your guilt or innocence.

Punishment that can be imposed by SPCM includes:

A GCM is the highest and most serious of Courts-Martial proceedings. This is where the most serious offenses will be adjudicated. While most offenses will not result in a death sentence, your punishment could result in long-term confinement and significant pay reductions and forfeitures that materially affect your and your family’s future.

Unless you elect to be tried by military judge alone, the hearing with consist of at least eight officers (and enlisted if you request it) serving as a panel (jury); a military prosecutor; and a defense counsel. In addition, unless you waive your right to a pretrial hearing, an Article 32 Pretrial Hearing must be conducted before a case may be referred to a GCM.

This hearing affords you an opportunity to challenge the evidence the government has against you before being formally charged and tried for a military crime. During an Article 32 Pretrial Hearing, the government must present all of their available evidence to an impartial Preliminary Hearing Officer. If the Preliminary Hearing Officer finds probable cause to believe that you committed the offense, your case will be referred for trial by GCM.

If found guilty, punishment that can be imposed by GCM includes:

Political Pressures Should Not Dictate the Outcome of Your Case

Our Military Defense law firm believes it is wrong to charge military service members without sufficient or substantiated evidence. In some cases, even the military prosecutors may not believe the complaining witness. However, in the military, prosecutors do not have the discretion to decide how cases should be handled. That authority rests solely with the commander, and those commanders answer to higher commanders who answer to Congress.

When a commander feels political pressure from Congress, they may feel compelled to charge cases forward to prosecutors who have little discretion to refuse to prosecute a case.

This is where our Military Defense law firm comes in – Attorney Brad Dixon advocates, rights wrongs, and protects the constitutional rights that so many have sacrificed to protect!

You have the right to retain your own private Military Defense Lawyer, even for an Article 32 Pretrial Hearing. However, you should retain a private attorney who understands the unique nature and procedures of the military legal system.

Our Military Defense Lawyer understands what you are up against when you are under investigation or facing a Courts-Martial. After spending many years as a military prosecutor and defense counsel, he now defends the constitutional rights of soldiers as Defense Counsel for the Army Reserves and his own law office in Richmond Hill, Georgia (right outside of Fort Stewart).

You can rely on his extensive knowledge and military law background to help counsel, coach or defend you against charges of military misconduct or crimes. Contact us today for a FREE Case Evaluation to explore your options and discuss a defense strategy.

Have You Been
Accused of a Military Crime?

Do not leave your future to chance! Our Georgia Criminal and Military Defense lawyer helps people just like you by telling their truth and defending their rights with dignity, honor and vigilance. You can rely on his extensive knowledge and military law background to develop a strategic defense that has your military legal rights, military career and community reputation top-of-mind. We welcome the opportunity to answer your questions and evaluate your specific situation. Please complete the form below – your solutions start here!